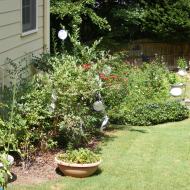 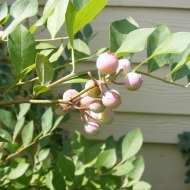 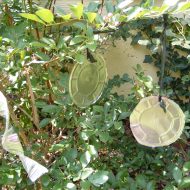 I’m beginning to think that this year I will not get to eat any of my blueberries from my fabulous bushes. On the other hand, the birds, the chipmunks, and the squirrels are having a grand ole time munching all of them.

Last year, I built a large blueberry cage with my husband. It was constructed with PVC pipe and bird netting that has small holes. This worked very well at keeping out the birds, but the tiny chipmunks just burrowed under the cage. I had to spread hot pepper flakes around the outside base of the cage to deter them.

I also noticed that spiders liked to build their webs inside the cage. It was very convenient for them to stretch their web in between the piping and bush branches. It was a lot of work just to get blueberries to spread on my morning cereal. Trying to raise the netting, get inside the cage, avoiding the spider webs, and not getting poked in the eye by a blueberry branch became quite an Olympic event. I began to see why some people eventually decide to stop growing edible plants. It’s quite a chore to fight all the animals away from your crops.

This year, due to illness in my family and recuperation. I decided to forgo erecting the blueberry cage. It really takes two or more to get it up and firmly in place. So I decided to try some old-fashioned animal scare tactics. That is why my blueberry bushes currently look like a kindergarten art project. Empty aluminum pie pans and other tinsel hang from the branches to scare the birds and other animals. I believe it has worked for the birds but the chipmunks simply look at it, shrug, and say to themselves, “It’s just some pie pans.” Therefore, I’ve eaten 3 blueberries this year. Oh well.

My Tweets
Join 33 other followers